Anne Williams, Art of Darkness: A Poetics of Gothic (1995) 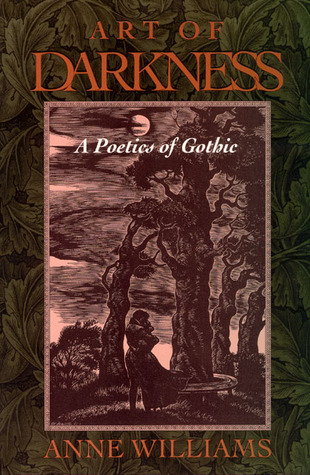 Anne Williams proposes three theses about the nature of Gothic in her critical text Art of Darkness: A Poetics of Gothic: Gothic and Romantic are one; Gothic has a male and female genre; and Gothic is a poetic tradition.  Williams somewhat convincingly uses Freudian psychoanalysis, Kristevan feminism, and Lacanian structuralism to describe and explain her ideas.  Building on her own idea to view literature within a familial structure, Williams proposes a birth myth for Gothic, a developmental structure for its two strains, a revised developmental process for woman, and a progeny for the Gothic strains.  Williams’s analysis can seem reductive to some reviewers because of her division of Gothic characteristics into two seemingly simple categories of male and female, which might suggest that any and all Gothic texts can fall into one or the other.  However, I find her delineations, definitions, and discussion to be a clear, if short, introduction to Gothic studies.  Despite the fact that Williams uses different theories through which to express her claims, this text presents an accessible entry point for scholars seeking to know more about Gothic and its history, looking for an introduction to the ideas of Kristeva—regarding semiotics—or looking for a re-envisioning of Freudian Oedipus and Elektra complexes.  Because the text itself is brief, one is left wanting to know more, giving the reader an incentive to seek out more information but leaving the reader with a solid base to build upon.

Williams’ introduction provides the backstory for Gothic.  She begins by describing what “they” have said about literature and Gothic: in order to be great, fiction must be realistic; Gothic was a style once upon a time, and it is no longer relevant; and Gothic is just one part of Romanticism, a feminine literary movement, and, thus, it is irrelevant.  Williams uses Ian Watt’s definition of realist fiction, saying a novel’s realism comes from how it portrays human experience rather than from the experiences it actually portrays.  Because Gothic has been situated mostly in the “female” tradition of Romanticism—a movement valuing intuition and emotion—Williams asks what kinds of ideas a “Gothic Novel” (a term with which she takes issue) would then put forth about women.  Williams takes issue with the term “Gothic Novel” because she sees it as being restrictive.  For her analysis there is no such thing as the Gothic Novel; rather, any text can possess Gothic characteristics.  The “Gothic Novel,” as it has been conceived of and analyzed before Williams, puts forth fairly patriarchal ideas: marriage is the only goal of women and the only story women feel the need to recount, women only want rich husbands, women are passive and hysterical.  Williams points out that the Gothic actually provides a means to address the inherent problems in a patriarchal society.

She tells us of the birth of Gothic in Horace Walpole’s The Castle of Otranto: A Gothic Story.  The beginning of this movement is right in the title: a Gothic story.  Walpole’s idea supposedly came to him a dream, much like many later Gothic texts will be conceived in either dreams or nightmares.  Williams’ exigency in writing this text stems from her desire to demonstrate that the Gothic includes both prose and poetry, popular and canonical literature, and both male and female narratives.  She builds on the ideas that families exclude and repress (as the Gothic has been by literary historians), reflect Oedipal dynamics (as the Gothic and its relations do), and that families form the basic structure of our society and from them come our conceptions of morality and behavior.  The family structure—the societal structure—creates boundaries; boundaries require transgressions; transgressions require punishments.  Traditional literature provided boundaries, Gothic committed many transgressions, and, within the texts, those transgressions are certainly punished.

Male versus Female; Female and Male:[]

Through her use of Freud’s Oedipal complex theory and Kristeva’s theory of semiotics, Williams discusses the creation and development of the male gaze.  As we gain access to language, we move out of the imaginary to the real, from the semiotic to the symbolic.  This process does not scar us; though, as we grow older, oftentimes we feel that language cannot express what we—especially women, according to Williams—want it to.  On the other hand, Freud describes a process that does scar males: the Oedipal crisis. This break with his mother and alliance with his father causes the young man, very early on, to conceive of himself in opposition to others.  However, Freud never provides a satisfactory explanation for how a woman begins to conceive of herself as a human being.

Williams offers the myth of Cupid and Psyche as the lens through which to discuss the development of the female conscious.  She says women never experience this sudden and terrifying separation from the mother, as males do, and that female self-creation takes longer and involves less separation from and more relativity with others.  Through her description of Psyche’s journey from innocent, naïve lover to knowledgeable, complex goddess and wife, Williams points out that through Psyche’s journey, Psyche becomes a real woman.

One of Williams’ prime examples of this female formation of self is Jane Eyre.  Jane must experience much trial and tribulation, must be separated from her love, must learn to survive without her love, and only then can she be rejoined with Mr. Rochester.  Once she and Rochester become man and wife, Jane embarks on a new path in life with a man who sees her as equal rather than inferior, and with whom she can give birth to Pleasure.

Williams’ analysis of female self-creation through the use of the Cupid and Psyche myth works as a less misogynistic discussion of what women want, as far as Gothic texts go.  Williams offers a feminist reading (and a deeper reading, I think) of the endings of many Gothic texts.  It isn’t that women only seek rich husbands and marriage and life ends there.  It is, instead, through the tumultuous journey to marriage that the female protagonists become full characters and learn much about themselves; only then, can they, like Jane and Psyche, give birth to pleasure.

Williams divides her text into an introduction, three parts, and an epilogue.  In the introduction she provides the backstory for Gothic and her own assertions that she will make in the text.  Part one provides an expansion of the family structure she will use to discuss Gothic and gives the reader information about the Lacanian and Kristevan models Williams will use in her text.  Part two delves more into the differences between the Male and Female Gothic lines, provides insight into the development of the male and female gaze and the import of those gazes, and discusses, briefly, some seminal texts from the traditional Gothic era (1790- 1830).  In part three, the most problematic section, Williams seeks to apply what she has been discussing for the last two sections to two poems by Keats, “La Belle Dame Sans Merci” and “The Eve of St. Agnes,” and two by Coleridge, “The Rime of the Ancient Mariner” and “Frost at Midnight.”  This discussion is too short and seemingly misplaced.  Parts one and two could have been expanded and Williams could have saved her applications for another text; or, Williams could have interwoven her analysis and her applications.  Separating the discussion and the applications did not serve Williams’ text, since all three sections could have been expanded if handled differently or at different times.

In her epilogue, Williams presents who she sees as the progeny of the Gothic: Freud.  Williams suggests that we should use Gothic to read Freud rather than Freud to read Gothic and argues that while Freud’s terminology is helpful in a discussion of what is happening in the text, using psychoanalysis to actually analyze the texts themselves falls short of what other theories or lenses of interpretation can do.  She says that at the heart of both the Gothic and Freud is the discussion of the “same psychosexual secret: the dangers of the irrational desires within the ‘other’” (242).  Finally, and one of her most enticing points, Williams argues that Freud, rather than doing women a disservice, actually has admitted women as being very powerful beings.  His theories accept “sexuality, nonlinguistic modes of meaning, madness, and dreams,” (247) all things which are not under the control of the male, the patriarchy.

Williams’ clear definitions, expansive notes and bibliography, and easy prose all recommend her to both beginning scholars and those already well-versed in many types of theory and scholarship.  Though her discussion could have been expanded a great deal, and she could have delved deeper into her examples, this text still presents some intriguing ideas about literature and the Gothic that enable the reader to see the Gothic, Romanticism, and feminism in new ways.