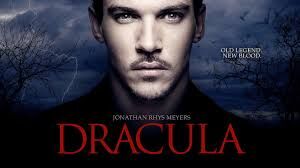 Dracula is a 2013 television series adapted from Bram Stoker’s novel Dracula (1897). The show was produced by the British production company Carnival Films and created by Cole Haddon, who wrote the first and last episodes. It aired October 25th on NBC and ran for ten episodes. Despite inattention from television critics and no affirmation of continuing seasons, the show has received local but strong praise from fan sites such as Rotten Tomatoes , IMDB , and Amazon Prime. Though the series was not a strong commercial success, its devoted fan-base speaks not only to the show’s innovation, but to the Dracula narrative as a story primed for new attention.

The show’s producers and writing team retain the major characters—Dracula, Johnathan Harker, Professor Van Helsing, R.M. Renfield, Mina Malloy, and Lucy Westenra—but the relationships between them are significantly altered, and this dynamic creates the show’s unique version of the Dracula narrative.

The narrative relies on the emerging industrial capitalism of late 19th century Britain to provide momentum for the episodes’ plots and subplots. Dracula, in this adaptation, is directly based on the historical character of Vlad Tepes, Vlad the Impaler , the famous, notorious 15th century Transylvanian prince. Early in the series flashbacks reveal that for crimes against the church Tepes is cursed to damnation, made an immortal by the Order of the Dragon , a wealthy, secret society bent on world domination via economic and political manipulation. The curse has unforeseen consequences in the form of vampirism. Dracula is later resurrected by Van Helsing at the turn of the 19th century in order to avenge the wrongdoings and domination of the Order of the Dragon. Dracula takes on the guise of a wealthy American industrialist, Alexander Grayson, to infiltrate London’s capitalist and social circles. This is done with the help of Renfield, a black lawyer having escaped the wrath of racist violence thanks to Grayson’s (Dracula's) superhuman powers. Grayson employs the journalist Harker as his press agent, so to speak. However, Harker is unknowingly doing Grayson’s “dirty work.” The series’ plot depends on Grayson’s clever manipulation of nearly every character, including a character not from Stoker’s novel: Lady Jane Wetherby, a huntsman whom Grayson seduces to blind her from the reality of his supernaturalism.

Dracula’s love interest is his ostensibly reincarnated wife, Mina Malloy. This provides what is a melodramatic, complex love story for the series: Malloy and Harker are engaged to marry; Harker is employed by Grayson, by which Harker intends to climb the socioeconomic ladder to impress Malloy. Dracula, by proxy of Grayson, is in love with Malloy, but he will not "take her" for he has an unerring sense of honor in this regard. Westenra is openly bisexual and admits her love for Malloy thus creating another layer to the situation. The series sees this situation play out along with Grayson’s rise as the major agent in a veritable energy arms race between the old world oil energy and Grayson’s nascent geothermal technology: a relentlessly modern threat to The Order.

The character relationships divergent from Stoker’s novel create the series’ narrative threads that provide a poignant comment on the Dracula narrative’s ability to withstand significant adaptive measures. That Van Helsing and Dracula are not only cooperative, but dependent on one another to achieve either’s desired revenge against The Order is perhaps the series’ most unconventional take on the story. This dynamic feeds the rest of the subplots: Van Helsing provides Dracula with the technology that enables him to bear the sunlight and thus avoid suspicion from The Order, who, by virtue of their history, seek out and employ huntsmen to kill vampires. Dracula is secretly reliant on Van Helsing’s knowledge of supernaturalism and science to walk in sunlight as Grayson among the society he intends to control. Via Harker, Dracula has what is essentially a detective to do the spade-work for uncovering information that creates scandal for The Order. Renfield is Dracula’s unyieldingly loyal and litigiously savvy assistant. From these three relationships, Dracula gains more and more power in the New World, and he is effectively pulling the strings of commerce in London to dominate capitalist enterprise.

Though Grayson’s technology is harnessing the earth’s magnetic powers via a giant, plasma ball-looking machine complete with steel levers, casings, and cogs that contribute to the spectacle (a technology that is quite different from current geothermal energy technologies), the series does use the term 'geothermal,' which intentionally creates a parallel to the rising anxieties of contemporary energy issues across the world. Grayson’s energy innovations are in direct conflict to The Order’s longstanding vested interest in the success of oil energy. Thus the corollary to 21st century energy concerns are easily seen.

The show depicts The Order as a ruthless, murderous, conniving community of politicians and social heavyweights bent on either exposing Grayson’s efforts as fraudulent or on taking control of the energy process themselves lest they become a relic. Grayson is an affluent, charming man going to great and painful lengths to stave off his true nature as a vampire, at one point vowing to never kill again, to live as a man. The twist is interesting: Dracula as an obviously sympathetic character with undeniable appeal. Though he may not be the obvious hero, The Order is the obvious antagonist. There are a number of connections and readings to be made from the show’s use of energy politics as the device by which economic power is attained; but it would be difficult to maintain that the writing is not in some way a comment on a thoroughly postmodern capitalistic world, and in this way the series manifests its relevance as an innovative adaptation.

Significance of the Series[]

The Order’s appearance in this series is not an aspect of Stoker’s novel, but a product of prior adaptations and of history itself: The Order of the Dragon being a historical Christian order with whom Vlad Tepes and his father had associations. This, so to speak, absorption of adaptions and history speaks to the malleability, durability, and shelf-life of the Dracula narrative. Success aside, which remains to be seen, the series' uses of adaptation techniques demonstrate the potency of the Dracula narrative as a transferable cultural vessel: the novel as a lasting commentary on Stoker’s Victorian Era conventions, the 2013 series as a commentary on contemporary issues, and the prolific number of variations and iterations between the two as versions with their own agendas and comments.

The writing team of the series implements significant differences in the dynamics of the characters’ relationships; that the story can withstand this type of “rewriting” calls attention to Dracula’s durability not as a novel in and of itself, but as a product reliant on consumership and authorship alike to maintain its relevancy, which is the main component to an adaptation's success. Were the dynamics of, for example, Jane Eyre (1847), Pride and Prejudice (1813), or Oliver Twist (1838)—novels that predate Dracula by at least fifty years and which have seen a significant number of adaptions—rewritten to such a dramatic extent (e.g., introducing characters and villains, rearranging audience sympathies; essentially rendering the product all but unrecognizable except for the names), the resulting product would likely draw scrutiny as “unfaithful,” as a product having tampered with a cast of beloved cultural characters. However, the 2013 Dracula series does precisely that. It uses the same cast of characters but claims very little similarity to the plot of Stoker's novel. It realigns nearly every relationship from the novel, introduces new characters, and casts Dracula as a sympathetic, near human character, growing less and less monstrous through the first half of the episodes' progression. Though this is hardly the first iteration of the story to rewrite the narrative, its significant changes while retaining the characters’ names reveal that the Dracula narrative is, as it were, beloved in a different way than other novels with lengthy shelf-lives.

This particular series becomes an exemplary version of Dracula in which adaptations along the way—from novel to other media—have left their mark either with or without the writing and production team’s intention. For example, it would be speculation, unless the writers confirmed as much, that the huntsmen aspects to Dracula (2013) are a product of the slayer narrative made extremely popular by Joss Whedon’s Buffy the Vampire Slayer (1997). Nonetheless, intentional or not, the narrative of having some team of qualified hunters as protagonists can certainly be found in a number of Dracula iterations, but they are a particular innovation of Whedon and pulses of that innovation are detectable in the 2013 series via Lady Jane. The theme of reincarnation is subtly present in Broker’s novel, yet it is heavily expanded and taken to the level of motif in Francis Ford Coppola’s 1992 Dracula, in which several of the main characters have their own 15th century corollaries. This theme also finds a home in the 2013 series, and drives the love interest of Dracula. Sifting through the probably uncountable number of Dracula adaptations and appropriations will certainly reveal a number of adaptation techniques that are in a sense absorbed by the different versions, which shows the Dracula narrative to be a sort of porous, unassailable narrative that allows for change where other narratives would not. That the series was green-lit for ten episodes on a major American television network attends to the narrative’s ability to attract attention within a competitive and thriving television industry, and it also attends to the story’s inheritable audience. This audience, or any Dracula audience for that matter, will be familiar perhaps not with Stoker’s novel, but with Dracula as a figure of especial importance and immense interest within popular culture of contemporary and past historical periods.