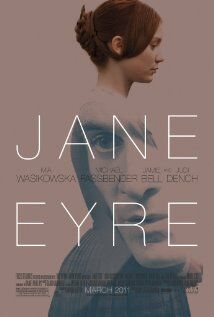 Charlotte Bronte’s bildungsroman by director Cary Fukunaga included the tagline “a classic for a new generation” at its release, and delivered to this new audience a version of the tale with minimal dialogue and maximal visual story-telling. This pared down adaptation (written by Moira Buffini ) focuses primarily on the intellectual and emotional attraction between Jane Eyre, played by Mia Wasikowska , and Edward Fairfax Rochester, played by Michael Fassbender . Other familiar elements of the story arc including Jane’s childhood and education at Lowood, and relationship with Mary, Diana and St. John Rivers are downplayed to make room for slow, hypnotic scenes of seduction—with lots of deep gazes—between the two protagonists, and extended shots of Jane as she experiences life during her stay at Thornfield Hall.

Jane’s relationship with the Rivers family, and particularly her involvement with St. John (played as cold and somewhat cruel by Jamie Bell) is the narrative frame. Jane’s early childhood with the Reeds, her experiences at Lowood, and her life at Thornfield are portrayed through flashbacks explicitly used as memories. This technique of flashbacks as memories works effectively with the pared down screenplay—each scene becomes anecdotal, and the audience sees only the moments of Jane’s history that she remembers as important. The audience is therefore presented with the basic essence of Jane’s experiences, such as watching Helen Burns beaten at Lowood, but does not have to sit through the visual portrayal of additional examples of her traumatic past that are included in Bronte’s original text, but that might quickly be viewed as redundant on-screen.

In an Empire Magazine video interview, director Cary Fukunaga has said that his intention was to “boil down” the story to its essence, and to portray a young woman’s struggle to find family, the people who will understand and accept her without having to say very much. Fukunaga sees the attempt to find the end of isolation in a lonely world as a human universal, and seemingly uses this universal quest to explain the continued appeal of Jane Eyre.

Although the traditional visual elements of the Gothic atmosphere have been largely suppressed in favor of naturalistic settings (notable exceptions include the architecture and age of Thornfield Hall and Lowood, and panoramic shots of the isolated Yorkshire countryside), as well as a realistic albeit intense romance, supernatural elements constitute a subtle theme in this film. The two most obvious cases are Vampirism, and Love or God as a supernatural force.

The idea of the Gothic is first introduced in the film by the character Mary Rivers, who seems to view St. John’s rescue of the dying Jane as fodder for a Gothic Romance plot line. Although Mary excitedly attempts to connect the Gothic to the reality of her life, she is checked by her siblings. In this way, the Gothic in this film is kept localized to Jane’s past and particularly her life at Thornfield.

The version of the Gothic that is presented to audiences of this film is primarily supernatural and indirect—Gothic elements take the form of fairytales and ghost stories told either to Jane or by Jane, but mostly disregarded as true or possible; typically the possibility of the supernatural is raised and then discounted. The Red Room at the Reed’s home is supposedly haunted, but Jane is not carried away by a ghost; Jane tells Adele of spirits of the North in the hills, and Rochester tells Jane that something may be lurking in the woods, but Rochester and Jane, rather than spirits are the only creatures that appear out of the fog. Jane herself is also consistently described as otherworldly, ghostly, or fey (by Rochester, and at one point by Mrs. Fairfax), but certainly is not.

The film’s use of vampirism as a theme further demonstrates the reality/unreality of the supernatural, and further connects this film to the Gothic tradition. Adele tells Jane of a woman who walks the halls of Thornfield at night, intending to suck the blood of her victims. When Richard Mason is attacked, his wounds include bite marks on his neck. But these two instances are explained: there is no monster or ghost, there is only Bertha Mason. She is still a threat based on a severe mental illness that causes her to be violent, but she is entirely human and real. In this way, the film, like Bronte’s text, highlights that the only things that are dangerous or predatory are people. This includes Rochester, who, Dracula-esque, pleads with Jane to give him her soul of her own free will. Although supernatural bloodsucking is negated as a real possibility, emotional vampirism is a real threat.

The one exception to the explained supernatural in the film seems to be the connection Jane has to Rochester—she hears his voice in her mind, and on the wind. This element of the supernatural is left unexplained by “reality” in the film, although based on Helen Burns’ conversations with the young Jane, the audience is led to believe that this kind of supernatural connection to others is existent and interpretable as the force of Love, or as the work of God.

Young Jane is depicted as being beaten, restrained, or neglected by her elders (usually, but not necessarily, adults). Audiences are led to believe that this is the case with all of the girls who inhabit Lowood as well. As an adult, Jane voices discontent at the restriction of women into roles of domestic passivity to Mrs. Fairfax, the housekeeper of Thornfield (played by Judi Dench ). Mrs. Fairfax discusses with Jane how lonely she has often felt at Thornfield because she cannot converse with the servants as equals. Jane is belittled by Rochester’s guests because she is a governess—a position that marks her as poor, and of a potentially lower class than themselves. Being young, being female, being poor, and being born into a low class are all stressed as points of relative powerlessness in the historical context of the film because they necessitate dependence. As a representative of all of these positions, Jane is cast as submissive in the relationship depicted between her and Rochester.

In one scene Rochester forces Jane to attend a party where she is publicly humiliated (this humiliation is emphasized by the camera angle, which makes Jane appear to be naked), and compelled to watch him flirt with another woman. Yet when Jane leaves, Rochester runs after her, leading Jane (and audience members) to believe that she is his primary concern. Rochester commends Jane’s paintings and intelligence, then gruffly sends her away. He commands Jane to sit still and silently and wait for him in a domineering way, leaves her for an extended period, then breaks social taboos by insisting that she interact with him intimately, and as an equal. He withholds her wages, forcing her to ask for them, underpays her, then says he will safeguard what he owes her while gesturing at his heart. And when he realizes that Jane is too young and naïve to understand that he is making romantic overtures towards her, he chooses to verbally encourage her belief that he is in love with someone else while physically demonstrating his affection for her, using his knowledge to manipulate her feelings. Rochester continually exerts his power over Jane as her master, and as her more worldly and experienced elder; yet this deliberate exertion of power is always combined with explicitly shown tenderness.

Likewise, Jane willingly fulfills her role in this power dynamic and submits to Rochester’s treatment of her. Not only are the scenes at Thornfield the only scenes in which Jane ever smiles, but audiences hear her repeatedly say that she would do anything for Rochester—as long as it is morally right. When the limit of moral correctness is transgressed, she exerts her control and calls off the arrangement, to the nearly total psychological breakdown of both.

If this film is intended as a “classic for a new generation,” the themes and qualities of the story that are highlighted suggest that contemporary audiences may be generally suspicious of supernatural Gothic elements if they are not handled explicitly skeptically. The highlighted emotional intensity of the romance also suggests that audiences may be likely to derive voyeuristic pleasure from watching this type of relationship power dynamic. The fact that this version ends without the “happy ever after” epilogue, indefinitely prolongs the emotional intensity of the onscreen romance, and provides a nod to skeptics (both of the supernatural and of happy-ever-after romantic endings).