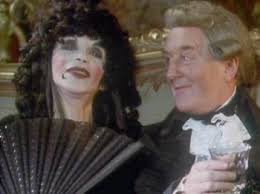 Northanger Abbey is a 1986 made for television film adaptation of Jane Austen's novel Northanger Abbey. It was directed by Giles foster and Produced by Louis Marks. The screen play was written by Maggie Wadey. The film was originally broadcasted on the A&E Network and the BBC. It starred Katharine Schlesinger as Catherine Morland and Peter Firth as her love interest Henry Tilney. This film adaptation of Northanger Abbey was made and aired in the eighties the most interesting part of this adaptation is that is puzzling. It is very over dramatized all of the cast performances, except that of Ingrid Lacey who plays Eleanor Tilney, seem to be something completely opposite of what we have come to expect in Jane Austen novels, adaptations, and characters. Maybe it is a big play on parody, or possibly it was done this was or an audience who favors offbeat types of shows. There are no facts to prove it is one way or the other. However, one thing is for certain the overdone eighties makeup on the entire female cast is definitely not something out of an Austin novel. However, the beauty of this film is in visual recreation of the gothic dream sequences that Catherine has in the film, but not in the novel.

Catherine Morland, a young woman is invited to go to Bath with family friends, the Allen’s, because the waters at Bath will help Mr. Allen's gout. Catherine has been sheltered most all her life, and escapes by reading Gothic novels that feed her over active imagination. Upon their arrival in Bath, Mrs. Allen introduces Catherine to the Thorpe family, including a girl a little older than Catherine, Isabella, who becomes Catherine’s best friend after they bond over their mutual love for gothic novels. James, Catherine’s brother, falls in love with Isabella and John, Isabella's brother and James's friend, sets his sights on Catherine. Unfortunately for John, Catherine has already fallen in love herself, with Mr. Henry Tilney. Catherine becomes friends with Henry's sister, Eleanor, and together the three spend a lot of time together going on several walks. Eleanor and Henry’s brother, Captain Frederick Tilney, arrives in Bath and sets his sight on Isabella, who at this point is engaged to James. However, having learned that James has no big fortune and a low income, she sets her sights on another and begins to flirt with Captain Frederick Tilney. Eleanor invites Catherine to stay with her at the Tilney's home, Northanger Abbey. Catherine accepts the invitation and begins to imagine what the Abbey will be like and compares it to the gloomy castles she has read about in her gothic novels. Catherine's imagination continues to flourish and she begins to suspect a dark secret at Northanger Abbey. Catherine is welcomed by General Tilney, Eleanor and Henry’s father, who has been told by John Thorpe that Catherine is the heiress to the Allen’s fortune. When he realizes that Catherine is not rich and will not inherit the Allen’s fortune, he sends her away immediately. Back at home, Catherine is very unhappy, she is missing Henry. Henry appears and the two share a long awaited kiss.

Coming of Age and Proper Etiquette

This film really embodies a coming of age story and uses the theme of coming of age and proper etiquette to portray that. At the beginning of the movie our protagonist and heroine, Catherine Moreland is a teenage girl who has recently emerged as a beautiful young woman from the very tomboyish young girl she had been in her past spent years of youth. She has been sheltered most of her life and is very naïve in the ways of the world, especially naïve when it comes to social propriety. She has never been in love and has never been outside of her home town, Fullerton. Her trip to Bath with the Allen’s is similar to a coming out party for Catherine. It is her entrance into society and adulthood. While arriving in Bath Catherine becomes very good friends with Isabella Thorpe, a girl of unequal fortune. She actively pursues her love interest, Henry Tinley, but is also actively pursued by and undesirable suitor of less fortune, John Thorpe. Catherine and John Thorpe go on a carriage ride in this film with Isabella Thorpe and James Morland, however, along the way James and Isabella go off in one direction and leave Catherine and John alone. The act of a young lady and gentleman being alone at this time was not considered to be good and proper etiquette. Then there is Isabella who gets seduces by Captain Frederick Tinley and ends up shamed, disgraced, and loses her fiancé, James because of it. General Tilney violates the code of hospitality and social etiquette when he turns Catherine out of his house without proper notice and makes her leave immediately. Throughout Catherine’s time spent in Bath and at Northanger Abbey she somehow actually does come of age. She has turned into a lovely young woman who appreciates others and by the time Henry Tinley kisses her and we assume proposes to her she will be on her way to becoming a respectable woman of society.

Throughout this film adaptation there are six dramatized gothic dream sequences Catherine has. The sequences of this film adaptation compared to other adaptations are very sexually eroticized horrific. One of these scenes is a very sexually motivated abduction scene, where Catherine dreams of being abducted. Two of the gothic dream sequences in this film are very lovely sequences of a delicate eroticism. The historically accurate, yet strange bath scene, for instance, in this film is one of a very light eroticism. We also, see the gothic theme come into play when we see the late Mrs. Tilney’s suffering represented in the symbolism of the statues in the garden at Northanger Abbey. Previous gothic literature also adds to the gothic elements of this film. Catherine is obsessed with gothic novels and focuses mainly on Anne Radcliffe’s The Mysteries of Udolpho. She talks several times positively about the novel while she is in Bath. This becomes a problem for Catherine as she borrows the main details of several gothic novels and comes up with the conclusion that General Tinley is an evil villain who has his daughter frightened of him (for good reason) and has done something horrible to his late wife. The music of the film is quite odd, as well. With weird vocalizations and Gregorian chants thrown in it gives an eerie feeling of doom. There is also the Abbey itself which we only see because an eerie mist clears so the audience can see across the lake and when the audience gets a closer look Northanger Abbey looks like it is much out of a gothic novel, it looks as if it is a dark, scary, and ancient fortress.

In both the novel and this film adaptation a person's wealth plays a very important role as does their class standing. A person’s wealth determines what economic and social class they are a part of. Class is an essential part of marriage concerns that govern the society and the main characters of this time period. Wealth and social standings create boundaries for everyone during this time period. A person is defined by their class status and wealth. For example, Isabella wants to marry someone rich, and dismisses James Moreland in favor of Captain Frederick Tilney who has more money and higher class ranking than James. Mrs. Allen is obsessed with money because she is equally obsessed with having the right clothes and shopping. General Tilney wants his children to marry someone who has a fortune; a person who has a wealthy family so, that they may inherit a fortune. While at Northanger Abbey, Catherine is constantly being asked by General Tilney to compare Mr. Allen’s home to Northanger Abbey. General Tilney also only invites Catherine to Northanger Abbey because he is told that she is the heiress to the Allen’s fortune, but as soon as he realizes that she will not inherit their fortune he sends he away immediately back to her home.

Although this film adaptation is comprised of Austen’s original language, conversations, and literary and artistic themes, it has not been well received by Austin fans. It seems as though the only thing the makers of this film stuck to that is in true Austin form are those things. The costumes, makeup, hair and several other aspects of this film just absolutely missed the mark. There is one very painful moment in this film adaptation that betrays altogether true Austin way and her novel; the makers of this movie have our heroine, Catherine Moreland, burn Radcliffe’s, Mysteries of Udolpho after she gets embarrassed in front of Henry because of her actions. Radcliffe and other writers of gothic literature during that time period are writers that influenced Jane Austin’s writings these are people that she looked up to for inspiration. So, it really goes against everything one would imagine Austen wanting when they have Catherine burn the book. Overall, if you watch the film strictly as a Huge parody on a gothic novel and not exactly an adaptation of Austen’s work it may be enjoyable or perhaps if you just think about what was going on during the late eighties and the type of audience the film makers would have been making this movie for; it isn’t so bad.