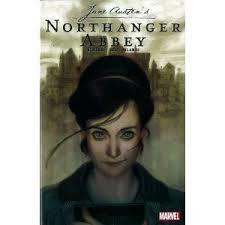 Northanger Abbey is a gothic novel adaptation from one of Jane Austen’s most humorous works. It was written by Nancy Butler and penciled by Janet Lee. The cover art was done by Julian Totino Tedesco. The colorist for this project was Nick Filardi and the letterer was Jeff Eckleberry. The graphic novel was edited by Sana Amanat. It was published on November 09, 2011 and was added to Marvel Unlimited April 08, 2013. The cartoon- like illustrations adds a touch of whimsy to the story. The gothic novel sticks pretty much to the original language of the novel. With the illustrious of Janet Lee, this nineteenth century story really comes to life like never before.

Catherine Morland, a young woman is invited to go to Bath with family friends, the Allen’s. This signifies a coming out type of setting for our heroine. Catherine has been sheltered most all her life, and escapes by reading Gothic novels that feed her over active imagination. Upon their arrival in Bath, Catherine first meets a Mr. Henry Tilney, a young clergyman who impresses Catherine with his wit and pleasant conversation. Mrs. Allen then introduces her to the Thorpe family, including a girl a little older than Catherine, Isabella, who becomes Catherine’s best friend after they bond over their mutual love for gothic novels. Isabella is superficial and fond of gossip she becomes a mentor for Catherine when it comes to the social world of Bath. James, Catherine’s brother, falls in love with Isabella and John, Isabella's brother and James's friend, sets his sights on Catherine. Unfortunately for John, Catherine has already fallen in love herself, with Mr. Henry Tilney. Catherine becomes friends with Henry's sister, Eleanor. Eleanor and Henry’s brother, Captain Frederick Tilney, arrives in Bath and sets his sight on Isabella, who at this point is engaged to James. However, having learned that James has no big fortune and a low income, she sets her sights on another and begins to flirt with Captain Frederick Tilney. Eleanor invites Catherine to stay with her at the Tilney's home, Northanger Abbey and General Tilney seconds the invite. Catherine accepts the invitation and begins to imagine what the Abbey will be like and compares it to gothic ruins she has read about in her gothic novels. Catherine's imagination continues to flourish and she begins to suspect a dark secret at Northanger Abbey. General Tilney, who has been told by John Thorpe that Catherine is the heiress to the Allen’s fortune is happy to have her at his home until later when he realizes that Catherine is not rich and will not inherit the Allen’s fortune, he sends her away immediately. Back at home, Catherine is very unhappy, she is missing Henry. Henry appears a little while later at her home and proposes. The two soon wed and the story has a happy ending.

Reading is a main theme in this graphic novel adaptation of the original narrative. In the original narrative Jane Austen’s novel, the audience is provided with the story of how Catherine gains knowledge on how to read both novels and other people by giving us Jane Austen’s voice, as the all- knowing narrator. Without the narrator’s commentary, much of this is lost in this adaptation When the language is delivered by a young, naïve Catherine rather than the witty and wise Jane Austen, as a narrator, it begs the question as to should we take the language as seriously in this graphic novel as we do in the original novel. It also makes the audience question that if Catherine were mature enough at the start of the story then it would not make sense for her to gain the education and knowledge she does throughout the story, as she matures and comes of age, for the knowledge and education would already be there. Catherine’s understandings of her foolishness are still an important part of the plot in this adaptation. The miscommunications she encounters are more subtle in the illustrations of this graphic novel than in the original novel. For an example, the illustrations of Isabella Thorpe sometimes appear as though she is contorted; which would suggest that Catherine doesn’t see Isabella clearly, the way she truly is. Reading also plays another big role in this graphic novel and we see it more vividly than with the narration. Catherine is obsessed with graphic literature and reads it most fervently. She wishes her life would have the type of excitement and mystery that she reads about in her gothic novels. So much so, that she even contrives a mystery of her own while at the Tilney’s home, Northanger Abbey. She concludes that the death of the late Mrs. Tilney was not an accident or mishap, but rather that it was thought out, planned, and execute by her husband, General Tilney. This becomes a problem for Catherine when her love interest, the son of General Tilney, Henry figures out what she has concluded from his mother’s passing.

In both the novel and this graphic novel adaptation someone’s wealth plays a very important role as does their class standing. It is all about the money. A person’s wealth determines what economic and social class they are a part of. Class is an essential part of marriage concerns that govern the society and the main characters of this time period. Wealth and social standings create boundaries for everyone during this time period. A person is defined by their class status and wealth. For example, Isabella wants to marry someone rich, for her family is not. She dismisses the idea of marrying James Moreland in favor of Captain Frederick Tilney, because he has more money and higher class ranking than James. General Tilney wants his children to marry someone who has a fortune; a person who has a wealthy family so, that they may inherit a fortune. While at Northanger Abbey, Catherine is constantly being asked by General Tilney to compare Mr. Allen’s home to Northanger Abbey. General Tilney also only invites Catherine to Northanger Abbey because he is told that she is the heiress to the Allen’s fortune, but as soon as he realizes that she will not inherit their fortune he sends her away immediately back to her home. Henry comes to apologize for his father’s actions and to propose to Catherine, telling her he loves her. Henry and Catherine then decide to wait to marry until the General gives his blessing to their marriage. Once the general is told of the true nature of the Morland's financial situation, which is moderate, and that Catherine would have three thousand pounds at her wedding, he realizes she is not quite the pauper she was painted to be and he soon gives his blessing on their marriage.

Love is generally one of the major themes in Jane Austen’s writings. It is no different in this graphic novel adaptation of her Northanger Abbey. When Austin writes about love it is comical at times in most every type of relationship. Whether, it’s a friendship, family, romantic or even a relationship formed solely on lust, Austin has a way of making it humorous. This adaptation is very similar to that. The relationships in this adaptation are also related to the theme of growth and development. The relationship between Isabella Thorpe and Catherine is one of manipulation and foolishness which makes it very comical. Then you have the relationship between Henry Tilney and Catherine which is confusing at times because it is both comical and thoughtful. Henry can sometimes seem overbearing in his love for Catherine. Throughout most of the novel and the gothic novel adaptation the relationship between these two young characters seems to be unequal. It seems to be unequal because Catherine is lacking in the areas of maturity and sense; whereas Henry seems to embody those characteristics exactly. It begs the question, if at the end of the story has Catherine grown enough and really learned anything from her immaturity ways of thinking to make this relationship seem more equal.

The reception for this adaptation seems to be a situation in whether the audience just loves it or they just hate it. It has gotten mixed reviews across the board. It seems the critics that do not care for the gothic novel, mainly just do not care for the illustrations of Catherine, the heroine. The illustrations of her make her seem pouty and smug at times, similar to the other female characters in the graphic novel. Unfortunately, the illustrator does not do a very good job of conveying her other emotions, like embarrassment or fear. There are a lot of emotions throughout the novel that get lost in this adaptation for the main reason that it is cartoony comic art form. It also seemed to really bother critics that the illustration of Catherine Morland on the front of the cover was not the same as the Catherine Morland they saw once they opened up the graphic novels and started to read it. However, it is greatly important that people are remaking these graphic novels and that the classics have made their way into this medium. It is important because recent, newer adaptations give a younger audience the opportunity to learn and experience these classic novels in a medium that is relevant to them.