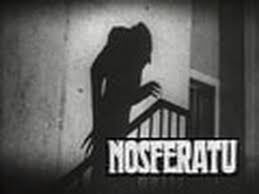 Nosferatu is a German silent classic film based off Bram Stoker’s 1897 novel Dracula. It was released in 1922, Produced by Jofa-Atelier Berlin-Johannisthal and Prana-Film GmbH companies, Directed by F.W. Murnau, and written by Henrik Galeen.

This film took quite literally the ideas of Bram Stoker’s Dracula to the studio. Some may say it was a direct steal from the novel itself, but for certain we can say that it was an unauthorized adaptation of the novel which resulted in the names and some other details being changed in the film because the studio could not get the rights to the novel. For example “Count Dracula” became “Count Orlok”, etc.

The material in the film is shortened compared to the novel, but in a way it is more pointed in subtext because of that fact .The film is set in the fictional town of Wisbourg, Germany. Knock, an estate agent in Wisbourg sends his associate, Hutter to Count Orlok’s castle in Transylvania because the Count wants to purchase a house in their town. They plan on selling the Count the house across the way from Hutter’s own home. Hutter leaves his wife Ellen with some family friends while he will be away. On the way to Transylvania Hutter runs into many locals not wanting to take him near the castle of the Count and warning him not to go out after dark.

When Hutter finally arrives at the castle he meets the mysterious Count Orlok. While enjoying his host’s hospitality, he accidently cuts his finger where Orlok grabs his hand and stares intently at the blood which Hutter finds odd, but does nothing about because he has yet to make the sale. Once Hutter finally manages to sell the house to the Count, he starts to notice more and more unusual things. Hutter notices that the Count is no ordinary mortal human being when he finds him sleeping in a coffin in a crypt, and based on the book he has been reading he realizes that Count Orlok is in fact a Nosferatu “vampire”. The Count hides in a shipment of coffins to make his way to Wisbourg. Along the way he causes death and destruction.

There are many deaths in the town, after Count Orlok arrives which the local authorities blame on the plague. Orlok becomes obsessed with Ellen, starring at her from his window as she is sleeping. Hutter had asked Ellen not to read the book he had found, but despite her husband’s wishes Ellen gives into her temptation and ends up reading the book anyway. The book claims that there is only one way to defeat Count Orlok. A woman who is pure of heart must give of her blood freely to the nosferatu and will keep the nosferatu by her side all night until the cock crows. Ellen invites Orlok into her room at night in hopes of defeating him. Orlok becomes so invested in drinking Ellen’s blood that he forgets about the sunrise. As morning approaches and the cock crows Orlok vanishes in what seems to be a puff of smoke as he tries to flee in a hurry, but most read the scene as Count Orlok being burned up by the sunlight. Ellen lives just long enough for Hutter to return to her and hold her one last time. The last scene shows Count Orlok's castle in the Carpathian Mountains in ruins, this symbolizes the end of Count Orlok's bloody terror on the people or Wisbourg.

Nosferatu shares a lot of the same themes as Bram Stoker’s, Dracula since it is such a close adaptation of the novel itself. However, many of the themes were lost when the studio had to change some details from the original screenplay to make it an original and not a plagiarism on the novel itself.

In both the original text and this film adaptation, there is but one married couple. However, the role that the two characters play in both works is very important to the overall narrative. Hutter and Ellen are the only married couple in the film, but the idea of a marital bond comes up several times throughout the film. One question asked is what the roles of the husband and wife should be. We see this through both characters several times throughout the film. We see it in the character of Hutter when he leaves Ellen numerous times throughout the film. The first time he leaves her to go to Transylvania to sell a house to the Count and the second time when he leaves her to grab the professor which ultimately causes her demise. We see it in the character of Ellen when she senses that Hutter is in trouble while he is away in Transylvania at Count Orlok's castle. She has a nightmare and yells out to him in the night; at the same time, Hutter is being attacked by Count Orlok. This highlights the importance of marriage in the film and the power of marital and romantic bonds. This marital bond between Hutter and Ellen is an important aspect of the film until the very end of the film.

Sexuality is commonly represented in the Vampire-verse. This film also highlights the importance of this theme. Just like the novel sexuality comes up often in the film adaptation as well. The only way to defeat Count Orlok is for a pure woman to distract the “vampire” with her beauty all throughout the night until the sun rises. Ellen symbolizes the ideal, sexualized yet pure female character. Ellen's pure beauty and femininity is what distracts Count Orlok in the end, which shows the power and influence of sexuality in this film and narrative. The obsession that the Count has for Ellen becomes sexualized throughout the film as his obsession grows for her. This all leads to a very sexual act in itself when Count Orlok feeds from Ellen's neck almost until the brink of death. Orlok's penetration of Ellen's neck is a sexualized act in itself. The fangs penetrating the victim's skin symbolizes any sexual act involving penetration. In addition to the penetration, we also find symbolism in the vampire's feeding of the warm blood in comparison to the result of sexual acts involving bodily fluids. This is all heightened, especially when you consider that it is the life force of the “vampire”.

Christian themes pop a lot in the novel, but also seem to transfer over into the film adaptation as well. Count Orlok, is representative of a satanic figure, most obviously in his appearance. He has pointed ears like a bats, fangs, and just dark/shadowy features all around. He is also representative of a satanic figure in his consumption of blood and his lust for it. Then on the other hand you have Ellen who sacrifices herself at the end of the film to save her entire village, representing Christian sacrifice; a savior characteristic that comes out in her character at the end of the film.

Even though Stoker’s heirs sued over the adaptation of this film being made and the courts ordered that all copies of the film be destroyed, one survived. Now, the film has come to be as a masterpiece of cinema. It is clear that Nosferatu is a close retelling of Dracula although some of the names have changed and some of the details that were originally in the plot line are no longer there. The difference in details from the original novel and this film adaptation have made some very important contributions to the Vampire-verse. One of the biggest changes from the novel to the film was the way sunlight affected vampires. At the end of the film Nosferatu, Count Orlok is burned up by the sunlight after spending the entire evening with Ellen. In Stoker's Dracula, The sunlight was pretty much harmless to vampires. The idea of vampires being killed by sunlight has become very popular in the Vampire-verse. Most all vampire narratives today show vampires being seriously affected by sunlight if not killed instantly. Another main difference form the novel to the film adaptation, Nosferatu is the what happens when a human being is bitten by a vampire. In Stoker's novel, when you are bitten by the vampire Dracula then you yourself would be turned into a vampire. However, in Nosferatu those who were bitten by Count Orlok do not turn into vampires, but rather are just killed. This has become a very popular theme in the Vampire-verse, especially in the more modern narratives. It gives the vampire the choice to kill his victim or to turn them. However, the many differences in detail the film may have compared to the original narrative, Stoker and Dracula fans can still easily spot the main story line and enjoy the film. As of 2014 it is Rotten Tomatoes best-reviewed horror film of all time. They call it one of the silent era’s most influential masterpieces;saying that Nosferatu set the template for the horror films that followed. It is amazing how many elements came from Nosferatu that most think originally came from Bram Stoker's original narrative, Dracula.