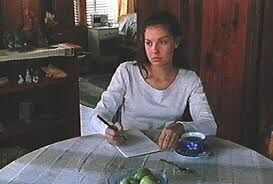 Ruby in Paradise is a 1993 film appropriation of Jane Austen’s novel Northanger Abbey. It is an updated coming to age story. It was written, directed, and edited by Victor Nuñez. It was produced by both Keith Crofford and Sam Gowan and it stars Ashley Judd, Todd Field, Bentley Mitchum, Allison Dean, and Dorothy Lyman. This film is one that focuses and puts more importance on the central character’s personality as opposed to the plot. The audience gets a closer look at the main character Ruby Gissing’s self-analyzing and her scattered routine and conversations on a day to day basis.

Ashley Judd plays Ruby Gissling our protagonist and heroine; she is our Catherine Morland character. As the film begins, Ruby is leaving a young man in Tennessee, and driving herself to Florida where she lands in Panama City, Florida, a summer resort town she visited as a child and has several good memories of time with her family there. She arrives in Panama City during the autumn months, which is at the beginning of the off-season for a beach town. Luckily, she gets a job at Chambers Beach Emporium, a souvenir store run by Mrs. Mildred Chambers, who hires her, and integrates herself into the community. The only reason Mrs. Chamber’s hires her is because she sees a younger version of herself in Ruby. At the store she befriends a co-worker named Rochelle. Rochelle’s character is similar to the character of Eleanor Tilney. This becomes apparent in the conversations the two share. At one point Rochelle gives Ruby money when she is desperately in need of it proving again to be an Eleanor Tilney. Mrs. Chamber’s son, Ricky, is a character similar to that of John Thorpe. He is handsome, a show off, and a liar. Ricky also represents the character of Captain Frederick Tilney in the same way and because he is wealthy. Mrs. Chambers tells Ruby that she prohibits any of her staff to date her son; she says this because of his wealth. Ruby meets another man named Mike, who is similar to the character of Henry Tilney. This film, like the novel, ends up with the heroine of the story caught in a love triangle. Ruby keeps a journal over a year and writes in it about her jobs highs and lows, her love life with men, her past and how it is affecting her and her hopes for the future.

Young adults around twenty-something dominate the scene in Ruby in Paradise, which is a film largely about growing up and maturing. Ruby in particular progresses throughout the film and changes her attitude and becomes much more mature in her awareness of her actions and her surroundings. Youth is also closely linked to the theme of folly in this film. However, folly isn't limited to the young in terms of age. For example, Mrs. Chambers believes her son we tries to convince her that Ruby has just up and quit her job at the souvenir shop without a notice or saying anything at all. We also get an example that proves that all young people aren’t prone to folly either. The character of Rochelle is one of sound mind and maturity for someone of such a young age. A lack of experience is what often leads to folly in this film, though. Youth in the film is more of a state of mind than anything else and coming of age. Growing up for these characters is also a state of mind. It is a matter of both mentally and emotionally maturing for many of the characters in this film. Lies are a theme in this film appropriation that continues to reoccur. Ricky persuades Ruby to ignore his mother’s wishes when it comes to the staff dating him. Ruby goes out with Ricky several times at the beginning of the film while his mother is away on business. When she returns Ruby cuts off all ties with Ricky because she has seen his true character, and it is not a character she likes. Ruby starts dating Mike who becomes her boyfriend by the middle of the film. Ricky still makes attempts to get back together with Ruby, but is continually rejected and put off. He shows up at Ruby’s home one evening in another attempt to get with her, but Ruby again insists that she does not want to continue this forbidden relationship with him anymore. Enraged at Ruby’s rejection of him, Ricky attempts to rape her and then he fires her and threatens saying that he will tell his mother, Mrs. Chambers about their relationship. However, at the end of the film Ricky comes into the store where Ruby has gotten her job back and a promotion to assistant manager, and apologizes to Ruby for his actions and tells her that he is receiving help for his issues. This shows both a mentally and emotionally maturing for his character.

Ruby in Paradise is largely a film about novels and about writing habits. The film has an odd sort of self- awareness of the original narrative, Northanger Abbey, from which it is an appropriation. While at Mike’s house, Ruby is looking through his books, and stumbles upon and reads Austen’s, Northanger Abbey. Ruby reads aloud from the book to Mike and says that it is a story like her own; she says that she too is a heroine against the odds. Rather than the film makers just telling us the background of Ruby, we learn about Ruby’s past, how she perceives the present situations she is in and the lives of the people that surround her and her hopes for her future all through a journal that she keeps and writes in for a year. By Ruby keeping this journal we get and inside look, Ruby’s view, into all of these aspects of her life. Gothic novels are made fun of in this film as well.

Relationships are a major theme in this film. Making friends and trying to figure out true friends are from your fake ones, and which ones you can trust is a major part Ruby in Paradise’s overall plot, as well as Ruby’s journey and personal development throughout the film. Rochelle becomes a very trustworthy and close friend of Ruby’s throughout the film. She is there to encourage and talk to Ruby if she ever needs it. She even loans Ruby money when she is in desperate need of it. The relationship between these two young ladies is a very mature one. This is completely opposite of the relationship that forms between Ruby and Ricky. They go out several times at the beginning of the film, but it appears that their relationship is one of just a sexual nature and really has nothing else going for it. This relationship turns disasters when after Ruby rejects Ricky’s attempts at dating her, he tries to rape her, fires her, and threatens her. The relationship between Mrs. Chambers and Ruby is a strained one at times. Mrs. Chambers originally hires Ruby, even though it is the off season, because she sees’ a younger version of herself in Ruby. Mrs. Chambers takes on a mentor role for Ruby as she teaches her about sales and running a business. She takes Ruby with her on a business trip with her so that she can learn more about the business. Their relationship seems to be going really well, until the events between Ricky and Ruby occur. After Rochelle tells Mrs. Chambers what really happened between the two, Mrs. Chambers goes to Ruby’s home to offer her, her old job back and apologize for believing the her son. This is a really good scene between Mrs. Chambers and Ruby. We see the two of them form a different kind of relationship. Moving away from the mentor and mentee relationship to a friendship between two women, she even tells Ruby to call her Mildred. The relationship between Mike and ruby is probably the most complex of all the relationships in the film. Their relationship is one of love and yet wanting. Mike is supposed to be the representation of Henry Tilney and yet, he seems to be controlling in this film and always wanting more from Ruby. At the end of the film Ruby tells him to stop looking down towards others.

The film received a lot of positive feedback from many critics and several awards, as well. After the movie's theatrical run, it was released on videocassette in 1994 by Republic and was also released in Canada that same year by Cineplex Odeon. Alliance Films released the movie on DVD in Canada, in 2008. In 1993 the film won the 1993 Grand Jury Prize for Drama at the Sundance film Festival. The film also received an award called the Independent Spirit Award for Ashley Judd’s role as Best Female Lead. This film is important to today’s culture because it puts a new spin and twist on an older classic. Jane Austen’s, Northanger Abbey stays relevant because of new adaptations like this one that are being made.